The Oak Aged Valkyria Absinthe (Order no at Systembolaget: 86192)

Is a very exclusive edition of Valkyria Absinthe only released in a batches of around 120 bottles each year.  The first batch that was released 2014 was all bought by Systembolaget's exclusive product range, a range that very few products have a chance to be a part of.  TSE as it's called,  requirements for products here is considered very high and must be specially selected by Systembolaget's buyers.

The Oak Aged Valkyria Absinthe not only qualified, but the 120 bottles ,that also where signed by the two owners and distillers, sold out in under three months! The price of these bottles was 695: - SEK.

The Absinthe had been stored on a small barrel of Swedish oak for about a year's time and the color had then had time to take a dark green color with a beautiful amber glow. The alcohol content was put at  alc.  60% by vol.

The reason that alcohol was reduced from the original alc. 68% by .vol was for that product with its wonderful vanilla tones from the oak barrel and its heavenly aroma made itself best to be enjoyed in a whiskey glass with only a few ice cubes.

If you were not lucky enough to get hold of one of these exclusive bottle from the first batch or the Second batch named "Second Release" there will soon be an opportunity again. But as the last two batches there will not be more that around 120 bottles. 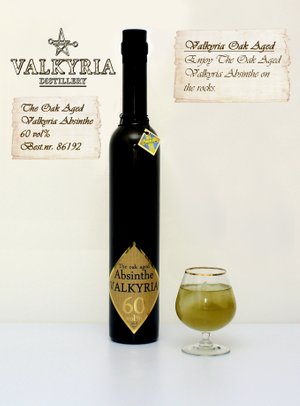